Instagram July: The Streets of Bushwick Arts & Eats: Ribs with Seaul at The Shop

3rd Ward: What Happened To All The Money? 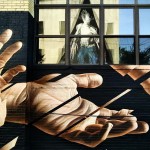 I was one of the lucky ones, it turns out.

In the early months of 2013, I signed up for a class at 3rd Ward. It was a 2x per week class on Web design–seemed like a savvy syllabus in a chill setting, in that factory space on Morgan. Plus work would pay for it.

Well, the class got cancelled before the start date, not enough attendees I think. I waited for my refund to show up. Didn’t come.

This was problematic. For work, I’d only get reimbursed when I’d present some documentation of my freshly acquired wisdom. Until then, I was out $400 large.

So I rung 3rd Ward. A guy answers the phone. It may have been Jason, the Third Ward founder himself. I don’t remember. He sounded like he was in command over there. I told him my plight.

He said, I could give you a refund, or… (pause)

How about if the instructor taught you personally? He asked me.

Like, I’d meet with the instructor once a week and I’d get a one-on-one lesson? I asked, a tad incredulously. The instructor would actually do this?

Maybe, the guy on the phone responded optimistically. He would ask.

As improbable as that scenario sounded, I agreed. Seemed easier that way. And it might work, even if it did have the desperate air of someone trying to do anything other than give out a refund. He said he’d get back to me.

He didn’t get back to me. So about three weeks later, I call back. By now, rumors of 3rd Ward’s financial woes were in the air. I dreaded the call. A woman answers the phone. I told her my plight. She took my name, found my bill on the computer, and reversed the charges, and the refund was granted! She was very pleasant.

Eight months later, Third Ward was history. Shuttered. And I felt immense gratitude to the woman who answered the phone. Maybe she was just a temp and following orders. Or maybe she knew all too well what was happening there. In either case, she did me an immense solid.

Others who interacted with 3rd Ward were not so lucky. Both educators and students lost money when Third Ward tanked, I learned from this Cultural Weekly piece from Robin Grearson, a former instructor of the place.

Many are still waiting for their money. Who knows how much 3rd Ward still owes. See, 3rd Ward never officially declared bankruptcy; it just hasn’t gotten around to paying people back.

The 3rd Ward story is a curious one though, by Grearson’s telling. Founder Jason Goodman, Founder and CEO, had the most righteous of intentions. It was a business to be sure, but one that would offer creative people “a way to make whatever they wanted to make, space to do it and, later, classes to learn how.”

Only when outside investors came in did the enterprise get overtaken by a capsizing case of greed-inspired mission-creep. Online classes, for real? Bushwick was booming and investors wanted a piece of the hot property.

But the sums didn’t work out for whatever reason, and investors retreated for greener pastures. With the closing of 3rd Ward, they may have lost money, but our community lost a lot more…