We Are The Wilderness: New Music “Girls Like That….”

Loosies, and the Mid-Atlantic Nicotine Underground

Curious thing we’ve noticed in our travels up and down the Mid-Altantic: Cigarettes are much more more expensive in Bushwick, compared to, say, their cost in Virginia, proud home of the largest U.S. tobacco conglomerate, the former Philip Morris*.

We learned this fact at a convenience store conveniently located off an exit of of I-95, near Fredericksburg, Virginia. Excellent donuts there by the way. 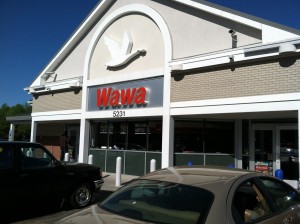 While we were waiting in line to purchase an aforementioned donut, we noticed that the patrons before us were buying copious amounts of cigarettes. Cartons upon cartons, throwing down rolls of $20s for the boxes, which cost about $40 each. Multiple patrons, multiple cartons.

In fact, patrons were buying SO many cartons, the former Phillip Morris* had to lay down the law, as evidence by this sternly worded sign posted in front of the cash register: 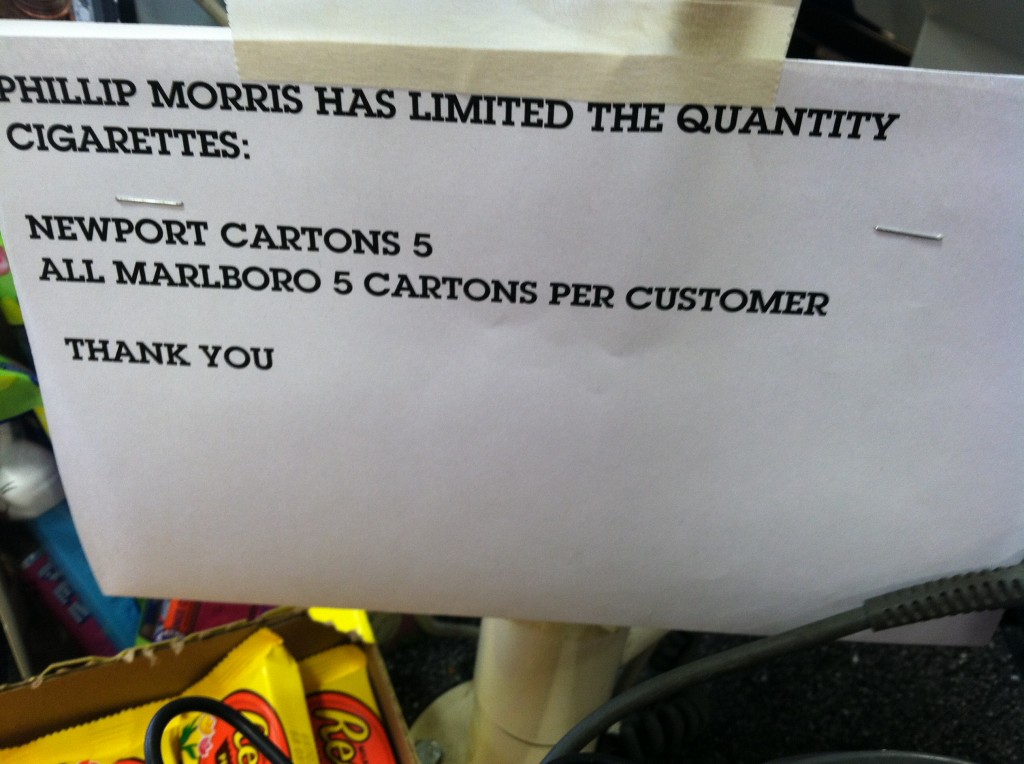 A reasonable request–who could possible smoke more than 1,000 cigarettes in between trips for gas and hoagies? But getting back to that $40 pricetag? Pretty low, eh? As the nicotine fiend knows all too well, the average carton of smokes in NYC would run about $110 – $120.  The difference between the two states is mostly due to the New York taking to opportunity to   gently prod its constituents to quit an expensive and life-threatening habit.

Now, any traveling nicotine fiend or small stakes opportunist can do some sums here.  Twenty cartons of cigarettes, for instance, would run $800.  And those same ciggies would cost $2,200 in NYC.  So if someone with that many cartons were to — again, just thinking out loud here — magically appear in Brooklyn willing to sell this load of cigarettes for say, $60 a carton**, that person may very well find an enthusiastic buyer, someone quite happy to save $50 or more per carton. And, at that price, for the whole lot or 20, the seller may get $1,200, and reap a profit of $400.

So, say, the person adding all this up was an enterprising but still financially-discouraged young person, someone who would like nothing better to escape his/her sleepy town for a one-night roll in the big city. He or she might quickly see that a shopping bag of cartons and a contact at the other end of a northbound trip could ensure a wild–and ultimately inexpensive–night in the Big Apple. You could spend every cent of $400 partying in New York, come back the next day not one cent poorer for it (if you didn’t dip into your seed money, that is). 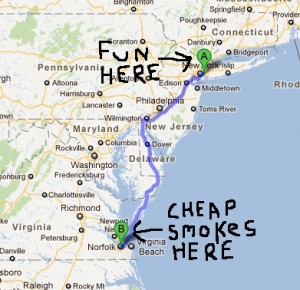 Inside the mind of some bored southern shitkicker

We, at Bushwick Nation, are NOT ADVOCATING this practice, as it is illegal. And being interstate, it’s Fed Illegal, which is not the kind of law enforcement fellas you want to be messing with. Sure, it is pretty much a victimless crime, at least in the short term, but as a culture, we must RESPECT our laws, as they hold us from complete anarchy.

All we are saying is that, obviously, we are not NOT the first people to notice the latent profit in the movement of toasted tobacco leaves rolled tightly. As Steve’s mom used to say, we don’t bring up issues, we just point them out.

But how to get from the great Commonwealth of Virginia to New York? The Chinatown Bus, we have found, provides low-cost carriage.  NYCBus, NumberOneBus, whatever the operations are calling themselves this year, their buses damn sure get you there, and cheap, $20 each way, if you pay cash…. 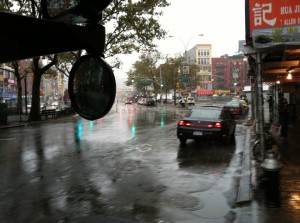 And again, we weren’t the first ones to think this up. All the Chinatown Bus offices, its worth mentioning, post stern signs warning patrons not to “traffic” ciggies. 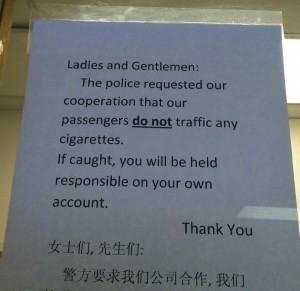 In fact, we once were aboard an unnamed Chinatown bus that, a few miles outside of leaving its city of departure, abruptly pulled off to the side of the highway to pick up a young man who had stepped out from the bushes with a hefty bag full of … something. 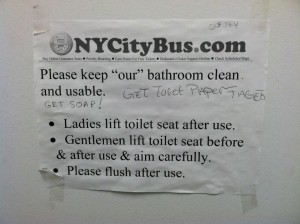 Another pecular, though unrelated, sign found in a Chinatown bus stop bathroom 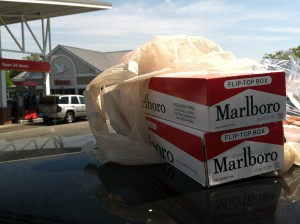 Speaking of cigarettes and The Law,  the Men in Blue must be cracking down on New York bodegas selling individual cigarettes, or loosies as they are sometimes called. Loosies are great for the casual smoker, someone who might just want a puff or two after drinking, but does not need to temptation of having a whole pack sitting around the house. It’s also a cheap solution for someone who can’t afford $12 for a whole pack. The state doesn’t like them, because the bodegas sales probably don’t include sales tax.

Our Willoughby Street correspondent, Sara, used to be able to get a loosie — either Newports or Marbs — for 75 cents each at her local bodega. The last time she asked for one, however, they turned her away, proclaiming in no uncertain terms that they do not sell single cigarettes, because that would be ILLEGAL. This she knew was not the case, because she had just seen other customers buy individual smokes. So she ended up asking a Hispanic passerby, who went in and bought one on her behalf.

We could hold forth and draw conclusions here about about the tangled impact of government regulations and big business profit motivations have on our daily life, and how resilient humans are at subverting this control for our own profit. But, really, we’re here just to tell you that the bus leaving back Virginia departs at 10 AM, which, believe us, comes awful early for the person who has just blown $400 in the bars, massage parlors and midnight diners in the Lower East Side. Just sayin’…. 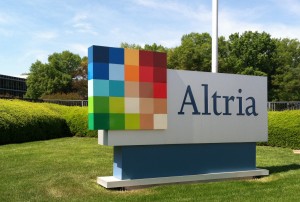 The Former Philip Morris would like to thank you for smoking. Manicuring these lawns isn't cheap.

*Phillip Morris is now properly called, we shit you not, Altria.

**The price can’t go too much over $60, because a carton of smokes from NJ will run about that much.

One Response to Loosies, and the Mid-Atlantic Nicotine Underground