Smart Bombing the Village with the Wizard of Wyckoff Cheap DJ: February 2013 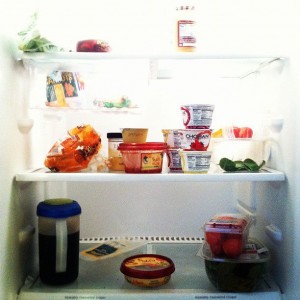 Like many young couples in the city, Justin Lamb and Christy Park set aside one day each weekend for getting their house in order. And among their chores is a trip to the local grocery store, so they can stock up on food for the week ahead. They usually stroll over to the Associated on Knickerbocker, chatting to each other along the way.

Unlike probably any other couple in Bushwick, however, Justin and Christy record their walking trips, and release them as a podcast, called the The Shopping List.

They chat about the food they will buy. They discuss things that happened to them recently. They talk about the neighborhood. They comment on new street art. They lament the scarcity of decent avocados. They riff off of each other’s flights of fancy. They react to what is happening on the street.  They stop in Hernandez Park, or Roberta’s, chatting all the while.

The episodes aren’t long — most clock in at under 20 minutes — and could be listened to while making soup or, well, taking a trip to the store. 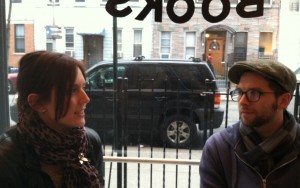 Christy and Justin at Molasses Books

Justin and Christy admit the premise of the podcast is a tad casual, and they are quick not to set expectations too high, either for themselves or potential listeners. They do little, if any, advanced preparation (though they do some editing after the fact) and just rely on the moment to provide inspiration. “Some of the episodes are more intelligible than others,” Christy admits. Even the recording is decidedly low-tech — they use an iPhone, which the two hand back and forth during their ambulations.

“I don’t think we have any delusions of fame about it. We do other creative stuff, so it’s a fun thing to have and not be super-precious about — We just do it, have fun with it, and get it out there and move on,” Justin says.

Their banter is entertaining, due in no small part that both Justin and Christy are creative types who can’t help but to analyze the world around them–mining it for humor and insight. By day, Christy writes and manages the Dance Films nonprofit, while Justin performs in the Upright Citizens Brigade, as well as writes and directs. That they both appeared is skilled in improv probably helps keeps the conversation lively and fluid. 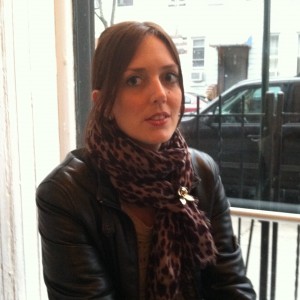 Though the show is not about Bushwick, specifically, the duo drop some knowledge about the hood. In one episode, they praised the sort-of-new Hi Mango market on Flushing, for offering super good deals on kale and other produce. They proffered an informal rating of the coffee shops, in terms in friendliness, ranking Cobra Club and the now-closed Cafe Orwell as the friendliest, followed by the slightly less amicable though still pleasant  Wyckoff Starr and Sweet and Shiny. The two do not cotton to surly baristas.

“Just try smiling, I understand we’re in Brooklyn, but…” Chisty says, before Justin jumps in. “I just don’t understand it. Maybe I’m just a bit of a fuddy-duddy. I get that it’s a cool neighborhood, and everyone is very trendy, but I’m also participating in an act of commerce,” he says. 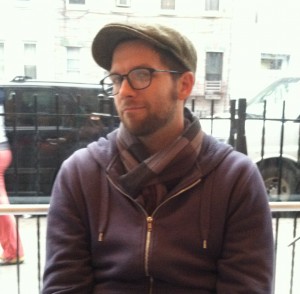 Another ongoing topic has been their former residence, the infamous 420 Melrose, where they lived until construction next door cracked the foundation of the house, forcing the occupants to vacate, immediately. To add insult to injury, after they left the building, “We were robbed,” Justin says.

“Because the landlord didn’t secure the building,” Justin adds. “A little icing for that cake.”

The podcast has even garnered somewhat of a following. Of course, friends and family listen in to stay updated with what is happening in the world of Justin and Christy. But other random people have tuned in from around the world as well, which is a bit surprising to them.

“We do have people on Facebook who like the show who we don’t know, who are outside the bubble,” Justin says, a little mystified, before realizing that he routinely tunes into television shows, such as Homeland, starring people he doesn’t know personally.

“I probably would listen to a Claire Danes podcast,” Christy says.

“What would Claire Danes talk about on her podcast?” Justin asks.

“That’s a bad problem to have for a mother,” Justin says, and they both laugh.