Was going through my social media feed recently, and it caught my eye that the DEAD LAST Dr. Sketchy’s was to be this past Sunday 10/20. This last historic show was also held in our dearest Bushwick, Brooklyn, here in New York.

For those new to New York, you may have heard of Dr. Sketchy’s from wherever you are originally from, as there are are over 100 branches worldwide. It is the creation of
@MollyCrabapple and a handful of people who saw the vision through fruition.

As its website describes, Dr. Sketchy’s is an anti-art school. It is anti-authority and laissez-faire. The very talented to the very curious and self-described, ‘ungifted,’ artists alike come down to quickly draw with themes shouted out to given poses. Ad lib art?

This last show, as many before, was hosted by @SydnStein and housed at Bushwick’s own Brooklyn Fireproof bar and creative space. @SydnStein spoke like a literary creature with fun use of creative adjectives and was genuinely very funny.

According to @theKateBlack, who also helped host the last show, Dr. Sketchy’s was conceived in concept about a decade ago, but the first show premiered The [late] Lucky
Cat in Williamsburg, Brooklyn. @theKateBlack has been doing photography with Dr. Sketchy’s for the last four years.

Several of the muses of the past and people that leant a hand in the movement were present this last night. It was a melancholy mood with laughs every now and then. The theme was ‘Lady Death’ and many were dressed in funeral attire–fitting of the last show and genuinely Halloween.

Entry to the event was $12 and there were very delicious Tennessee honey whiskey cocktails to be had. Every chair was occupied with standing room only. 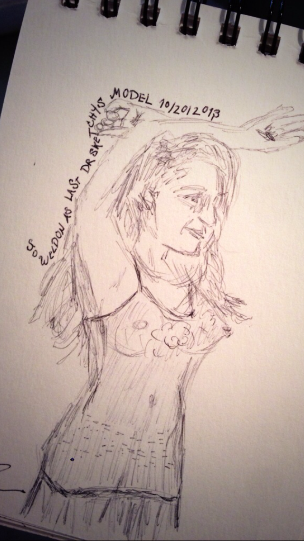 Drawing of Jo Weldon by @GrungyBerns

On this last night, our muse was lady, @JoWeldon who was one of the first models and fittingly ended the New York tradition. Jo is a top burlesque model, author and activist for sex worker rights and freedom of sexual expression.

@JoWeldon posed for a 10 minute themed portrait for which one must integrate a dead cartoon. Needless to say, I only had enough time in this challenge to draw Jo. Many talented others captured Jo [and] the theme and were rewarded delicious spirits.

@MollyCrabapple was asked about what the lasting impression the movement created meant: “I was just so honored at how many people told me it changed their lives and gave them their tribe in New York. When I was 22 and started Dr Sketchy’s, I never could have imagined that it would have grown and endured as it did.”

@MollyCrabapple agitated the art scene in NYC and continues to do so in activism. As an indie journo, @MollyCrabapple has brought us direct accounts from Guantanamo in both art and documented findings. @MollyCrabapple also detailed the Manning trial recently and is presently bringing attention with art to the Melissa Alexander incarceration and other injustices.

It will be exciting to see what new avenues @MollyCrabapple will explore. Molly is one to follow!

@GrungyBerns is an independent citizen-journalist and activist who loves grunge & punk music, and talking about politics!