From the Wood to the Wick- Hurricane Sandy and Election ’12 Hoodwitch Horrorscopes: December 2012

About Last Night: No, Nobody Saved You Any Coke 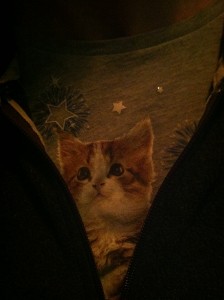 We’re hereby officially anointing Thanksgiving as a week-long holiday, y’aw. Also, we’re changing the name to Thanksforgetting, in which we drink our way through the entire week, attempting to put behind us the shitstorms that have been our lives of late. Yes, this will happen every year.

For the holiday, we holed up in the Bushwick Nation Conference Room #1   enjoying a series of growlers filled with Brooklyn Black Chocolate Stout, a tasty brew from the Associated on Knickerbocker that can easily send one flying. After buying the growler itself, for around $5.40, you can get it filled with a gallon of beer for only $10! So, from the afternoon and into the evening, we  emptied these growlers, ate chili, and held forth…

Happy ThanksForgetting from all of us!

Our favorite #overheard quote of the week came from our fire escape, where we were privvy to a one-sided telephone conversation that went something like this…

Ponder, if you will for a second, the idea of someone actually hoping that a person with a readily available barrel full of coke — during a holiday week — would somehow think to set aside some of the delicious white powder for later, for a friend. This struck us as the funniest thing we had ever heard and we riffed on it for far too long:

“You seriously just asked me if I had saved you some cocaine from last night?” #Overheard

Last week, we walked the streets by night, menacing the many Bushwick bars with our incomprehensible Tweets…

Even Mama Joys, which lured us in with the promise of a $4 shot-and-a-beer, eventually banished us from its midst!

Judging from our Instagram peops, we weren’t the only ones making trouble last week. Mizz_q braved the Brooklyn Noir at 2 A.M.:

Othatjo did the late night creep across the Meatpacking District…

Karaoke host Sarahbooz suffered injuries she could not explain!

Showering is a constant exercise in “What the fuck did I do to myself THIS time?!” because, seriously. What? #Bushwick #Brooklyn #NYC #drunk #ouch #bruise

Author Tim Kreider paid us a visit, and we showed the notorious NYT Opinionator around. He’s looking for a Brooklyn apartment. He last lived in a Clinton Hill turret, he told us, and wishes to find another…

“Once you go round, you never go back”

At Mazelle, Kreider and Bushwick’s own always-fiery St. Petersburg-expat blogger KateTheRed traded barbs about how Siberia would fare during global warming, causing Kreider to comment…

“yes and when you go to Siberia, I’d advise taking only a loin cloth and sun tan lotion” @mazellebk