Here Comes the Flood: Sandy Creeps On NYC About Last Night: No, Nobody Saved You Any Coke

From the Wood to the Wick- Hurricane Sandy and Election ’12

Heyyoooo! After a brief hiatus due to Hurricane Sandy, I am indeed Back in Action Jackson. There are two things I’d like to discuss in this week’s column, both of which are too long for me to include any notes. My apologies in advance.

Hurricane Sandy largely left both Bushwick and Ridgewood unharmed. In the days following throughout last week, bars and restaurants in Bushwick, according to Bushwick Daily, saw a 60% increase in sales. I was out on Halloween night and witnessed every bar packed to the gills. But while this was understandable, it was clear that both neighborhoods were practically bubbles. One story I read about how someone spent their time during the hurricane, which was later retracted (but not due to it being untrue), told about a huge hurricane party that later turned into an acid trip. While I personally was disappointed by this, other people I spoke to told similar tales of riotous debauchery while half of New York City flooded. 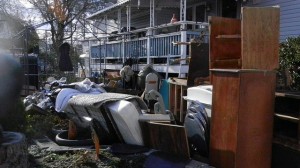 While myself and others often complain about media hype, this time it was different. In the week following the storm (and even today) mainstream media coverage, supplemented in a huge way by social media, showed the carnage and destruction that had been wrought by the storm, almost nonstop. It became depressing, but it was also a good thing, as there is often a large disconnect between New Yorkers when disaster strikes as many of us become parochial in our own neighborhoods. I’m guilty of this as well.

A result of this was that people in both neighborhoods realized the actual effects, they put their heads together and got their hands dirty bringing relief to affected neighborhoods such as the Rockaways, Breezy Point, Coney Island, Sheepshead Bay, Sea Gate, Belle Harbor, Marine Park, Gerritsen Beach, lower Manhattan and Staten Island. Let’s look at that list for a minute. That’s a lot of New York City.

While media does manipulate our opinions and emotions through video clips and the basics of rhetoric (pathos, ethos, logos) this time it was for good. Six years ago I was living in a basement in my mother’s apartment in New Jersey, which was the bottom floor of a two-family. The apartment turned out to be on a water plate and we were about 9 blocks from the Passaic River. During a horrible storm, the basement became flooded with six feet of water and raw sewage.  I lost everything minus a blanket and a backpack with a few items of clothing. Electronics, laptop, furniture, family heirlooms, Christmas decorations, a washer and dryer, a library of media and books; all completely gone. I wound up getting clothes from a handout from my older brother and friends put me up for three weeks while the landlord cleaned the place out after the DOH temporarily condemned the building.  FEMA gave us a check for $1,0000 to replace everything. The landlord raised the rent after we moved back in and with the mold returning we were forced into a one-bedroom apartment which was the catalyst for me to move to Brooklyn sooner than later. While these were just material possessions, the next time something like this happens, please consider the possibility of losing your possessions and home. And in addition, please consider what you sound like to others who were affected when asked for your reaction to a natural disaster.

The two funniest things I heard about the election on Election Day was one person complaining about crying infants and children running around at the voting center (this is why I moved from Prospect Heights) and then personally witnessing a white guy with a jean vest and a Morrissey backpatch (ugh) try and register to vote right then and there for the election after recently moving from Florida. My knee jerk response to both is a simple “Fuck you,” but let’s go into detail. 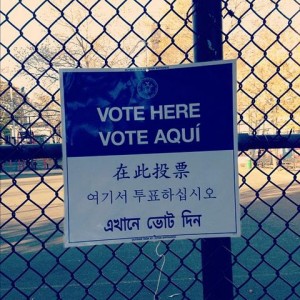 To the first person, this is New York City. Hence there are over 8 million people living on top of each other, many of whom are children. As Whitney said, the children are our future, so it would make sense to bring them with you to vote. After all this is Bushwick, I don’t suppose a child’s mother would hire a nanny to watch them while they stand in line for an hour to vote? I would actually congratulate people for bringing their children with them to set an example. While I personally dislike voting (not for standing in line but rather for my own personal opinions about American Democracy) it’s good to see people who feel they’re involved in the political process pass that on to the next generation.

As for what I personally witnessed this is naivety at best. My personal prejudices against Morrissey aside, you can not expect to simply show up on Election Day, register and vote right there. Good for you that you moved out of Florida, but could you really expect to take advantage of the voting locations being moved after Hurricane Sandy to just vote right there and then? The Board of Elections in New York City might be disorganized, but they’re certainly not stupid. 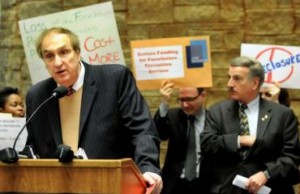 Photo courtesy of The Daily News

But more important is something that’s been neglected by most local media, particularly for the 53rd District in Brooklyn. Yesterday I went to vote at the Ridgewood Bushwick Senior Citizen Center at 143 Himrod Street (right off Central Avenue.)  While this in itself was no big deal, what I found out through some very simple research was that the RBSCC was founded and continually supported by Vito Lopez, New York State Assemblyman, who coincidentally was up for reelection this year. Lopez was recently censured by the State Assembly for sexual harassment, and was forced to step down as the head of the Assembly’s Housing Committee (as well as being barred from having any interns under 21.)  Further research also found that he gave a lot of handouts and jobs to family members and friends of his, which the NY Daily News reported on back in September. I thought about this as I voted for a Republican for the first time in my life and then again this morning when I read how of course Vito Lopez was reelected. Next time I’ll vote for Boss Tweed, or rather Boss Hogg and call it a day.