Too Many Bars: An Argument for A Moratorium on Liquor Licenses From the Wood to the Wick: Karaoke From the Horse’s Mouth

From Mistress of the Dark to Master of Pop

Like many artists, Antoinette Johnson was first inspired to the creative life not by a master of the form, but by a quirky pop figurehead.

To look at a painting as fresh, fluorescent and breathtaking as “Alone and Still Standing,” you might think that Johnson would be an acolyte, or at least a sympathizer, of NYC artist wunderkind Andy Warhol. Instead, when asked about her inspiration, she namechecks not Warhol but Elvira, the saucy horror movie hostess and subsequent horror film actress.

Elvira brought class, humor and panache to the routine duty of introducing decades-old B-grade horror flicks to bored television viewers. As a child, Johnson admired how Elvira “wasn’t going to cave into any negative feedback,” Antoinette says. “That is just how she was. She didn’t let anyone get her down.”

An alumni of Bushwick’s now sadly-defunct 950 Hart art space collective, Johnson is about to enjoy her first Manhattan gallery showing. Her solo exhibition “Manhattan Rampage: The Art of Antoinette Johnson” opens this Thursday, from 7-9 PM at the Le Salon d’Art, a hair salon by day and gallery by night in the Lower East Side (90 Stanton Street to be exact).

Much like Elvira, Johnson creates art in a space you didn’t think could be a canvas. In the past few years, she has been mostly known not for her painting but primarily for her hair sculpture (Hence the showing at Le Salon d’Art), where you’ll see the same vibrancy of colors and bold designs: 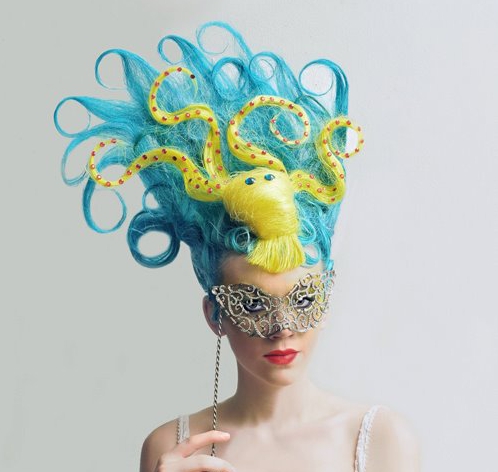 Antoinette started doing hair sculpture in 2006, after picking up some techniques from a fetish model. She learned quickly, and was soon hired out for horror fests and music gear conferences to model her Tri-Hawks and other elaborate ‘dos. She also worked with famed high fashioned photographer Joe Lance.

And as if hair sculpture wasn’t colorful enough, Antoinette also delved into performance art. A few years back she co-created a show, called Super Fuzzy Dinosaurs, that unfolded entirely under black lights. She and her partner would dress as scantily clad dinosaurs and smash a model city, Godzilla-style. Only when moving to NYC a few years ago did she pick up painting again, after hiatus of more than a decade.

“I like outdoing myself,” Antoinette says. “If I did something elaborate, I want to do something more elaborate the next time around.”

The lushly macabre work of Stephen Gammell, an influence on Antoinette.

Trying to explain an artist’s work from his or her influences is a sucker’s gambit, of course. Though for the record, Antoinette also cites the rich macabre illustrations of both Edward Gorey and Stephen Gammell. And we can’t forget the creative family genes as well: her gandfather was a carpenter who constructed elaborate little wooden ships in bottles, and her father was a painter and a builder of geodesic domes during the 1970s. Add to the mix punk rock, horror flicks and any number of other influences and you get a wild and yet still somehow coherent style. 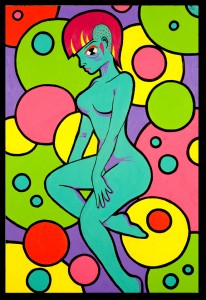 Her work, though in acrylic, does recall the deceptively bright work of Andy Warhol and other pop artists, at least to an art novice such as myself. But, examining her work, “You think you’re going to get it, but when spend a few extra minutes, you will see extra layers,” says her curator Sean Alday. “You start to notice the different brush strokes. You literally see the bristles of the paint brush where she is making these hard edge lines. Not too many people are pulling off that hard edge work right now.”