Noise in Bushwick: The Guidelines 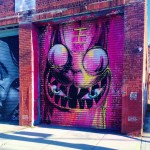 This is Bushwick. Some noise is expected, late at night, even — especially — late on weekday nights. You want peaceful, go join the Park Slope Nation.

If you’re lucky, you live on a street where, when the weather is right, spontaneous sidewalk parties erupt–food, dominoes, a bottle of Hennessy by the recycling bin–and last until 3 AM. It is a neighborhood sport here to drive down the block and set off car alarms with a booming sound system.

The general rule of thumb about noise in Bushwick is this: If your neighbor has a party whose bounds leak into your sanctuary, you don’t whine, so he won’t bitch when you do your own blast.

But this was not a party. This was four hipster musicians practicing, in their front parlor, the fuck out of some ska-influenced indie-rock at full volume. Next door, in the first-floor front apartment. On a Monday night.

After a few hours of such racket, I walked over to the next door, for a friendly talk, you see? But when I got to the top of the steps I found no buzzer, so I reached around and knocked sharply on a few times on the front parlor window. They stop playing and one of the musicians peered out the window. I would later find out his name is Ryan. Or maybe I’ll just call him Ryan. “Turn it down?” he asked, agreeably.

“Yeah, turn it down,” I yelled back , suitably huffily.

I trotted back to the apartment, and we enjoyed the silence for about 20 minutes. Then they recommenced playing! I stomped back over. I climbed straight up on the basement bulkhead doorway in front of the front parlor window and rapped more vigorously this time. The pane shook with my message of discontent!

And then cracked and shattered into smaller pieces.

Oh fuck, I thought. They’re going to be pissed. I heard them putting aside their instruments and hurrying over to the broken window.

And thus I was thrust into one of those pivotal moments in life that afford you a second or two, but no more, to make some major decision that would determine the outcome of events far into the future. I could either act just amazed as they were that I actually broke their damn window broke. Or I could just roll with it.

I rolled with it.

So when Ryan wildly opened the blinds, I said as coolly as I could, “Hey, you guys need to stop playing. It’s too late.”

“What the fuck, you just BROKE OUR WINDOW!”

“Yeah, I’m sorry about that,” I continued, forcefully oblivious. “But you guys are playing too loud. We’re trying to have some sleep here.”

Ryan was furious. “What are you going to do about our broken window?” He couldn’t wait for the answer though, which I didn’t really have. Instead, he charged out of the room, out into hallway, and headed to the front door. I quickly stepped down from the bulkway, scurried out the front gate, letting the metal door to the property shut behind me.

Soon Ryan is right up against the metal door, making angry noises about doing me some bodily harm. Another member of the band  — a woman — was behind him, also angry, but clearly trying to talk Ryan down too. He looked like he was going to pounce on me! Except, for some reason, he couldn’t open the gate door.

“WHAT DID YOU DO TO THE DOOR? OPEN THE FUCKING DOOR,” he yelled in crazed disbelief through the metal mesh.

Evidently when I shut the door, the outside door knob fell off, effectively trapping him, and everyone inside the fenced-off front stoop, inside.

“I didn’t do anything to your door. That’s your problem,” I said. I look down and saw the doorknob on the ground. So I picked it up and handed it to Ryan, which admittedly is a completely useless, and maybe dangerous, thing to do. For a second it looked like he would beam me with it. 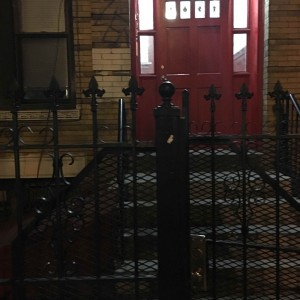 Instead Ryan spastically started climbing over the iron fence, which is a good five feet tall, and the woman kept yanking him down. I tried reasoning with her instead, saying that its late, you guys need to find a practice space, people are trying to sleep, etc. “But you broke our window. It’s winter, and we have no window,” she said.

About this time, my AirBnB roommate, Ilke, yelled out of our second story window, “Your music sucks!!” Ilke was a mysterious and beautiful dark-haired Turkish woman whom, I would later learn, had a talent for provocation. She was not helping matters here.

Another member of the musical collective yelled out, “It’s Bushwick, you idiot” which annoyed me because it is pretty much what I say whenever I cranked up the tunes. It IS Bushwick, after all. But then someone from a window across the street yelled, “Don’t practice at 11:30 at night.”

Finally, Ryan managed to scale over the iron fence, and once he landed on the other side, he started bouncing around the sidewalk all boxer-like. It looked like he might take a swing at me, though he was also looking increasingly comical. I eyed him warily.

“What are you going to do about our window, you fat, old balding fuck! You fucking yuppie,” Ryan spit at me.

“I don’t want to fight you, man,” I said, a little hurt from the fat comment. I had been losing weight at the time. “I just want you to stop playing your music.”

I decided that this was all going nowhere so I headed back to my place, locking the door behind me.

Once upstairs — surprise — my buzzer started ringing incessantly. A few seconds passed, I heard the sound of broken glass hitting the steps.

So I go back downstairs. No one is around, but there is shattered glass all around the foot of our door. At first, I think Ryan, or someone, broke one of our door windows, but none of our riot-proof pains were actually broken. So I grabbed a broom in the hallway and start cleaning up all this transplanted glass. Soon Ryan came down the sidewalk with another shovel load of his broken window.

“I hope your yuppie dog cuts his paws on this glass,” he said. Ahh, there was the retribution. It was a bit misguided given the guy who had the dog in our building moved out a few months prior. He was in a band too, in fact. I never heard them though — because they  had a practice space.

But by that time, everyone’s anger had cooled. We all were getting tired. The drugs were wearing off. The woman told Ryan to cut it out.  I apologized for the window and offered to pay for it, but Ryan said the landlord would probably pay for it.

I complimented him on the band — they were sounding tighter I had noticed. A Dominican musician we both knew came over from across the street and urged us to work out our differences, saying that everyone in the neighborhood was watching and that we didn’t want to further feed their curiosities.

So, now I feel embarrassed about the whole deal. White people just don’t know how to act sometimes.