What 7/11 must learn about Brooklyn About Last Night: Bushwick Ginger Social Brought the Heat to Brooklyn Fireproof (East) 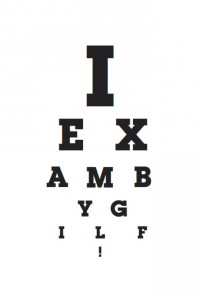 “We’re all hustlers,” says Bushwick-based street artist gilf!, of NYC. “If I can make someone smile, give them a break from this challenging life, even for a moment, then it’s worth the risk of putting it up.”

This Thursday, gilf! will ask you to check your vision. On February 7, Dumbo’s Arcilesi & Homberg Fine Art gallery will hold the opening reception for a exhibit of gilf!’s work, called I EXAM (The exhibit will run through March 10).

“All the pieces for I EXAM challenges our inclination to blindly accept societal norms, rousing the viewer to wake from the comfort of their hypnotic state to embody reality,” she wrote to us by email.  “As with all my work, I try to push the viewer to look deeper into their world, to see past the noise of society and see things for how they truly are.” 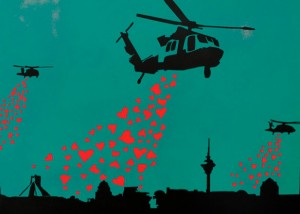 “To Tehran with Love”

Gilf! grew up on the hard streets…of Minnesota. She came to street art by pushing the envelope on graphic design, rather than through the pursuit of tagging. Working mostly with with wheat paste or stencils, she brings a tough but whimsical conceptual clarity to the walls. Her handle was not the shorthand for (a) banging grandma, but rather is a childhood nickname reclaimed to sign her new work.

In college, gilf! started studying engineering but quickly switched to graphics and furniture design. “There was something so refreshing about NOT being expected to have the same answer as everyone else,” she writes. 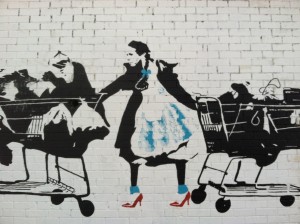 She came to New York City for an internship at an ad agency,  where she learned to swear off “working in a padded grey uninspiring box again.” New York, however, inspired her. “The sheer endless opportunities that this city holds intoxicated me. I didn’t know what I wanted–but I knew I would find it here,” she writes. The day after graduation, she was on a plane back to NYC.

A few years after working in an interior deign firm, she was inspired to create art again, after seeing a wall painting by Swoon outside her home. “The first street piece I made was stencil that said ‘Love Life.’ I still have it. I wake up to it every morning,” she says. 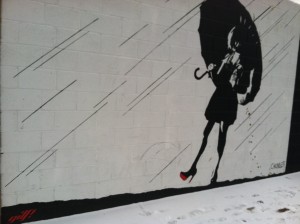 “When It Rains It Pours”

If you’ve been around the hood, you have seen her work — the expansive “When It Rains It Pours” mural on Knickerbocker and Grattan, or the shopping cart lady at Bushwick 5 Points, on Troutman between St. Nicholas and Wyckoff.

Last June, gilf! curated some street art along Flushing Ave. for the Bushwick Open Studios, bringing in The Yok, Willow and Sheryo, as well as adding her own piece, “In the Garden of Good and Bushwick.”

Last November, in Little Italy, she did some iconic political art on Grand and Mulberry, a piece rendering President Obama as a marionette on a red stage and presidential candidate Mitt Romney as an empty suit (with a blue tie, natch). 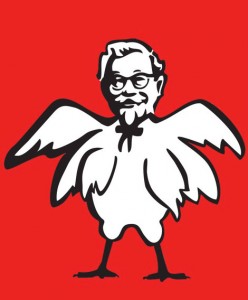 Her work has been described as both light hearted and socially charged. There is often a message in gilf’s work, one that prods the viewer into a new, more expansive way of thinking. But there is also humor.

“I want to challenge people’s thought processes, and to challenge the way they interpret their realities [but] If you yell too loud for too long people tune you out. I volley between the two styles to challenge myself, and to keep it interesting,” gilf! writes.

For gilf!, the street provides the opportunity to get her art and her ideas in front of people directly.  “They can take it or leave it, absorb or ignore it. Those who are open to their environments can be affected by what I create. That to me is very powerful. It’s the reason I create outdoor work at all.” 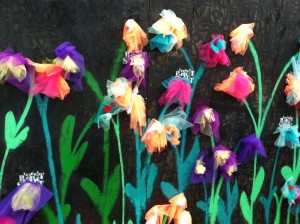 “In the Garden of Good and Bushwick”

Like many other artists straggling around the neighborhood, gilf! came to live in Bushwick for the inexpensive work space. But she stays for the vibe. “I love hitting the openings at Low Brow Artique, and grabbing a drink at Miles. It’s nice to feel like I’m a part of a community,” she says.

Not that she doesn’t see how Bushwick’s very success may be its undoing.

“There is just such an unspoken divide between the artists moving in and those who came before us. I’m concerned to see it gentrify so quickly. There are very distinct differences between those moving in and those who have lived here for a while,” she writes. “I wish there was more of a dialog. It could be a very powerful community if the separate parts could come together.” 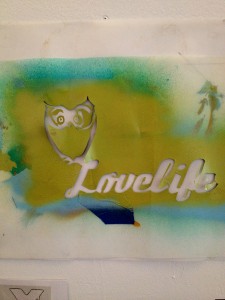 (Know a Bushwick street artist we should meet? Hit us up!)