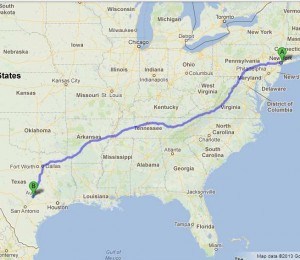 You can make the 26-hour trip in less than two days if you stay hard on the pedal.

Happy road-tripping to all those Brooklyn bands truckin’ down to Austin this week. Get to know those state rest stops (West Virginia offers free hotdogs!) and long-haul fill-em-ups.

Some of the bands/acts who play SXSW go on to fame. Some even score an entry on Madge’s speed dial (hello Gogol Bordello), but most, sadly, just make the trip back to Planet Oblivion. But, good news for us music sleuthers, their finest songs continue to shimmer like tiny defiant diamond-y stars against the endless darkness of obscurity.

So every year, at least since 2006, South By Southwest, or a party on its behalf, has released a collection of MP3s from some of the bands playing that year. The resulting blob of a file is usually about 1,000 or so tracks, best obtained by BitTorrent (Just get the free client).

Alas, this year is only 999 tracks. Still, it’ll take us another year to sort through them, but in the meantime, here are some of our forgotten faves from years past:

A Minneapolis band, and an offshoot of another Minne band, the Hang-Ups. Neil Gaiman once tweeted his approval of this wistful number. “Where I used to care, there is only air…” (SXSW 2008).

Philly singer-songwriter whose first album won Salon’s best unreleased album of the year for 2001. This was off his second, which we hear is just as good. We wish heartbreak would always go down this smoothly (SXSW 2006).

We’d catch up on “Shameless,” ourselves…L.A. synthpop band sings about the virtues of sharing with a loved one a cheap motel room with good cable (SXSW 2009).

Publicity-adverse Australian singer-songwriter last seen in Madrid. He was earnest AND young (SXSW 2009).

Denver slowcore band that released six albums, and this beaut came near the end. Chris Isaak would be wise to cover (SXSW 2006).

“Kinnard doesn’t need a biography. She needs professional help,” warned the official Last.fm bio of this Pennsylvania preacher’s daughter. Off her first and thus far only full length, the codependent-ly titled “The Courtesy Fall” (SXSW 2007).

Long-time Tampa-based “insurgent country” artist (so said Billboard), Ronny Elliot has tales aplenty, about holding up Jimi’s Marshall cabinets during a show, about how Elvis preferred his local women. He’s old enough to damn well sing what he pleases (SXSW 2006).

As forlorn as a windswept Nebraska field in the winter, “Take These Thoughts” won best Americana Song from the Independent Music Awards in 2005. A creative duo who often luck into the right places — they once ran a traveling cooking show that served hip young Brit celebs — the pair are still mostly known, to those who remember them at all, for this song (SXSW 2007).

Deliciously catty summer single, and best autotune of the word “shit” eva. Off the dubiously titled “The End of Irony.” The L.A. electropop duo just packed it in last year, but not before getting some songs in “The Office” and “Snakes on a Plane,” as well as on WFMU (SXSW 2008).

“I ain’t a beepbeepbeeepbeep” from the SanFran beat boxer and live looper Kid Beyond (SXSW 2007).
PLUS: Hidden Bonus Track: 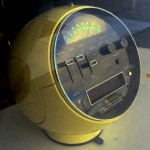