Smart Bombing the Village with the Wizard of Wyckoff

(Editor’s Note: He comes in from the night, frost on his beard, madness in his eyes. His vestments speak of a hard journey, and his presence fills the bar. Evil Jesus, aka The Wizard of Wyckoff, has something to tell you…) 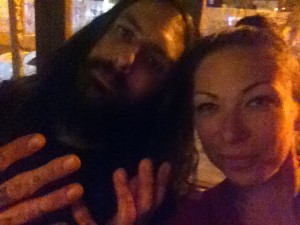 “To complain is to walk in circles whilst counting your steps……but some’a dees guys boy, they’re some REEAALLL carrot danglers.”

“So, a mushroom is raping an asparagus, the asparagus turns back in anguish and yells, ‘You’re not a very fun guy!'”

“Many of you are no doubt wondering how I consistently maintain my youthful virility and endearing disposition. Simple. I sleep when I’m hungry and eat when I’m tired.”

“It’s like shootin’ at ducks at the carnival, but there aren’t any ducks. And there’s no carnival.”

“So everybody thought the hurricane was caused by Mitt Romney and Barack Obama conspiring together to destroy New York City and bring about Martial Law. But in fact, it was not. It was a bad concert by ICP, Insane Clown Posse. They rapped so terribly that they induced the Creator of the Universe to become so irate that he took a fucking hurricane shit – he was happening to be traveling over the northeast sector of America — he was so distraught by the crappiness of the rapping of ICP — the Insane Clown Posse — robbing… And clowns are supposed to be funny. Funny, cute, and they are supposed to make kids laugh. But THESE clowns are violent and ugly and against humanity. Their raps were so terrible that it caused a maelstrom in the sky.”

“Little-known fact: Did you know that if you name your child with two first letters the same and write it on their birth certificate that way, as in Jjoe, he will be born with a stutter?”

More from the Wizard of Wyckoff here…